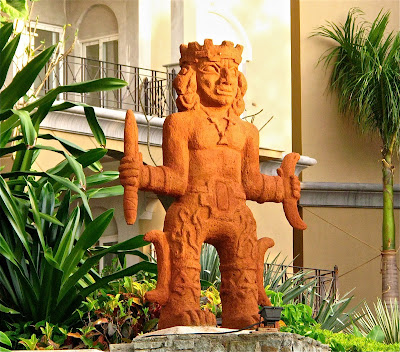 This first day of the month Daily Photo Theme is "statue." Tamarindo is a small resort town of only about 3,000 people. There are not grand boulevards and public buildings with statues.
I decided to show one of the outdoor statues right in front of my condo on the grounds of the Tamarindo Diria Resort, which is the largest resort in Tamarindo.
Because of today's theme, I want to tell a little story about statues -- or the lack of them -- in Costa Rica. Please bear with me, because Americans, in particular, need to learn the bit of history explained below.
Costa Rica is the only Latin American country where you will not find a statue -- usually equestrian -- of a great liberator who is considered the father of the country by winning freedom from Spain by bravery on the battlefield. Costa Rica never fought for its independence. Spain largely ignored Costa Rica, as there was no gold, and when Nicaragua obtained its independence, Spain simply abandoned Costa Rica also.
Costa Rica did not even know that it was no longer a Spanish colony until weeks later, when a messenger arrived from Nicaragua and informed the people that they were on their own.
Without a liberator to honor with statues, Costa Rica needed a national hero to develop its sense of national identity and pride. Its national hero is Juan Santamaria, an illegitimate son of a peasant who led a charge in 1856 to defeat an invading army of U.S. adventure seekers and mercenaries led by William Walker, who had conquered Nicaragua and who was attempting to establish a Central American nation that would be ruled by slave owners from the American South seeking a place to continue slavery. Juan Santamaria, who was just a teenager when he rushed the American position and set fire to it. The Costa Ricans rallied to win the battle, Walker retreated, and was later defeated and executed.
There are statues to Juan Santamaria in San Jose. Ironically, and I believe inappropriately and insensitively, there is a statue of William Walker in his native Nashville, Tennessee. The statue to him there honors him as the only resident of Nashville who has achieved the position of the ruler of a country. To me, this communicates that the people of Nashville regard the William Walker invasion as having established a legitimate Central American nation. As an American, I am saddened by such callousness and disrespect shown to the people of Costa Rica, who fortunately welcome Americans to their country with friendliness despite our past transgressions.
To see how other City Daily Photo bloggers interpreted the theme of statutes: Click here to view thumbnails for all participants
Our photos posted on our Viva la Voyage travel photo site this week are some underwater close-up photos that I took of the inside of iridescent clams in Aitutaki, in the Cook Islands of the South Pacific. If you have not seen them, I respectfully submit that it is worth a visit, as they are unique.
Posted by Dave-CostaRicaDailyPhoto.com at 12:55 AM

Another fascinating story. Thank you, Dave.

I hope the people of Nashville remove Walker's statue sooner rather than later. Very insensitive of them, I think.

Love the light in your photo!

And I believe that it was in 1948 that Costa Rica abolished its army and the budget normally for military purposes is used for education, security and culture. Wise nation. Terrific statue and information, David!

Love the energy of this statue. A lovely choice and thanks for the history lesson which is pretty astounding. Unfortunately too many countries can look back at their history and be ashamed.

Interesting history from Costa Rica. The statue is neat looking.

Very interesting piece of blogging. And a great statue.

That is an interesting history and I agree with you about the stature of Walker. It makes you wonder about what they were thinking when they erected it. Thank you for sharing that bit of history.
The Statue in your photo is a beauty!

What a great piece of art, that statue! Perfect for theme day today!

Thanks for providing all the interesting information Dave! This is a fantastic post for Theme Day.