Papagayo peninsula from the airplane 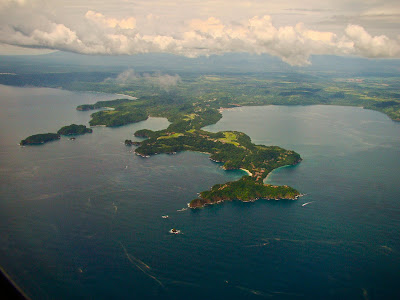 I will be showing you a series of photos of the Papagayo Peninsula during the next week or two, starting with the photos of the entrance that I have shown during the past three days. To get you oriented, here is a photo of Papagayo from the air.
The government fostered the development of this area for upscale tourism, and upscale it is. In the narrow saddle near the end of this peninsula is the Four Seasons Resort. The Arnold Palmer golf course is visible as the lighter patches of green.
The Gulf of Papagayo is to the right. Across the Gulf is a Hilton all inclusive resort. There are other resorts tucked away in the area. The newspaper just announced that Papagayo has been selected for the first resort in Latin America by Bulgari, the jewelry company that also owns 3 hotels, in Tokyo, Bali and Milan, with a fourth in London opening next year. The newspaper said that the Bulgari hotel in Papagayo will cost $100 USD to build and will have room rates of up to $4,000 per night.
Today is Sunday, so we have new photos posted on our Viva la Voyage travel photo site. This week we return to Bellagio and Lake Como to show photos from the Villa Serbelloni, a retreat for scholars owned by the Rockefeller Foundation.
Posted by Dave-CostaRicaDailyPhoto.com at 2:55 AM

Aerial views are wonderful ways to demonstrate the terrain. Your explanation and description is perfect, esp. re. the golf course.

The thubnail view reminds me slighty to Jurassic Park movie, just when they arrive to the island. I don´t know, is just a thought. BTW, great shot!

Oh, that's yummy. I want to play that golf course. Perhaps you know someone? :-)

We've watched some house-sales in Costa Rica on HGTV - you've got some expensive properties down there!

Now I have a whole new perspective of this area. That really is a skinny little stretch of land.

Re undergrounding utilities, it does make sense when the developer puts them in at the outset of a development, although it costs about three times what overhead lines cost. For an upper income development, that is a cost easily borne. But, to retrofit existing communities, especially less densely settled ones, the dollars don't work.

I remember a version of this view. It's stunning seen first-hand. And as for Bulgari, a fool and his money are soon parted. I'll rent your condo, thank you.