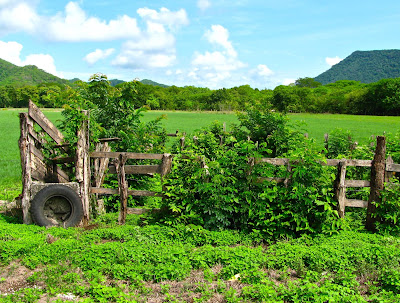 This is an old cattle chute along the side of the main road the leads through the Nicoya Peninsula, which comprises much of the northwest province of Costa Rica of Guanacaste.   I took this photo not far from the town of Nicoya.

I am showing this photo to follow up to the comment I made about a week ago about President Daniel Ortega of Nicaragua declaring that he would challenge the 1824 vote by which Guanacaste voted to be part of Costa Rica rather than Nicaragua.

Today in the town of Nicoya the President of Costa Rica, Laura Chincilla, cabinet ministers and ohter politicians will participate in a march and rally to protest the provocation by Ortega against the people of Guanacaste and the soverignty to Costa Rica.

It is particularly ironic that Ortega would threaten Costa Rica because when his Sandinista forces originally took power in Nicaragua in the 1980's and the USA wanted to arm the Contras to overthrow the Sandinista government, Costa Rica refused to allow the USA to use Costa Rican territory for training bases for the contras.  The USA retaliated against Costa Rica by cutting its aid, undermining the economy.

Instead of yielding to pressure for military tactics, the then-President of Costa Rica, Dr. Oscar Arias,  personally nogitated a peaceful solution to the crisis in Nicaragua, and he was awarded the Nobel Peace Prize as a result.

Today's photo also has a tie-in to the little series I have beenrunning about biodiversity during the last few days, as I will show tomorrow.

This week we are showing photos of the Spanish colonial architecture of Grenada, Nicaragua on our Viva la Voyage travel photo site.
Posted by Dave-CostaRicaDailyPhoto.com at 4:03 AM

Central America's history is rife with conflict. Thanks for the background info.

I hope the situation gets settled peacefully.

What a fascinating story. But we need no more provocations. Will humans ever get over the need for power?

Your photo reminded me of a golf course we play here which must have been an old ranch at one time for there are many broken down fences like the one you show and also an old cattle chute on the 10th hole.

So beautiful and green. I hope things turn out well once again for Costa Rica.

It is a fine old fence, Dave.

Good luck to Costa Rica in the current saber rattling from Nicaragua.