Crocodile: "Is it time for my dental check-up?" 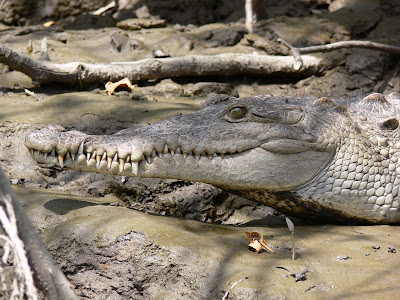 This crocodile was lurking in the underbrush on the banks of the Tempisque River in Palo Verde National Park. His color matches the mud bank quite well, although he is certainly not as camoflauged on the river bank as he is when he is floating just under the surface of the water.

This close-up of the crocodile's head demonstrates how tour operators can take tourists in boats on river cruises to view the wildlife up close in their natural habitat. It is similar to the Jungle Cruise ride at Disney World or Disneyland, except the animals are real, of course, and the tour guides do not have a microphone and do not give a narrative of corny jokes and puns.

This crocodile allowed us to get so close I could zoom in on his head. You can enlarge the photo to check his teeth. Is it time for his dental check up? Costa Rica has very good medical and dental care, and there is a growing trend of people from the USA coming to Costa Rica for medical or dental procedures that are not covered by insurance at home. The savings can more than pay for a vacation while recuperating.

Crocodiles don't go the dentist of course. They can get their teeth cleaned by one species of bird that picks insects off them and can even clean their teeth without being eaten like all the other types of birds that the crocodiles encounter. This remarkable cooperation between species is something biologists would call "mutualism."

P.S. (I realize that the above contained a strained segue, but would you rather I talk about dental care with a crocodile photo on display, or would you prefer to see a photo of a person being worked on by a Costa Rican dentist?)
Posted by Dave-CostaRicaDailyPhoto.com at 3:00 AM

Excellent photo! Great information. I don't know how to tell the difference between an Alligator and a Caiman - is it the size? Thought the segue was fun!

Kelly,
Here is the answer to your question about the difference between crocodiles and caiman, which will be illustrated in the future by some caiman photos I will post.

Caiman are much smaller, as you surmised. They reach 2.5 m. or 8 ft. in length. Also, caiman (and alligators) have rounded snouts and crocodiles have more pointed snouts.

On crocodiles the fourth tooth on their lower jaw protrudes upward outside their upper jaw. On the photo I posted today, however, I count only two lower teeth before the large identifying tooth, so maybe this crocodile needed to go to the dentist after all.

Of course, in the wild I do not recommend getting close enough to either a caiman or a crocodile to inspect its teeth. While in a boat, I have been close enough to crocodiles to be splattered by mud by them when they rushed from the river bank into the water.

Incidentally, the Nile crocodile is more aggressive than the American crocodile.

I should make a disclosure that the above information is courtesy of my Costa Rican wildlife guide books, and not based on the only training in zoology that I received, which was a single college class entitled "Introduction to Biology for Non-Science Majors" that I took (an enjoyed) 39 years ago at George Washington University in Washington, D.C.

This guy looks like a sculpture done in cement. Great

My what big teeth you have....

Eek. I wouldn't even want to be close enought to one to get a shot like this. (Which I think is great, by the way. The photo, I mean.)

LOL at your P.S. I wouldn't even have thought the dentist portion of your text as strange if you didn't point it out. I find thought and word associations fascinating.