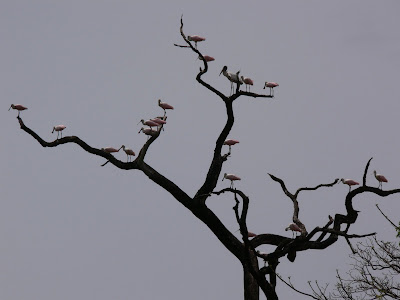 Here is a flock of roseate spoonbills, perched on a tree in Palo Verde National Park. I think it is rather curious that they are all faced in the same direction.

Roseate spoonbills are part of the heron and egret family. They have two distinctive features that makes them easy to spot.: (1) pink coloration, which will be more apparent in a photo I will post tomorrow of a roseate spoonbill in flight, and (2) a rounded, "spatulate" bill rather than a pointed beak.

They are most commonly found in the Gulf of Nicoya. River excursions in Palo Verde Nat'l Park, easily arranged from Tamarindo, are a perfect way to see them, as the park includes the Tempisque River near where it flows into the Gulf of Nicoya. The population of roseate spooonbills in the southeastern US was nearly hunted to extinction 100 years ago because their pink feathers were popular for making fans.
Posted by Dave-CostaRicaDailyPhoto.com at 2:55 AM