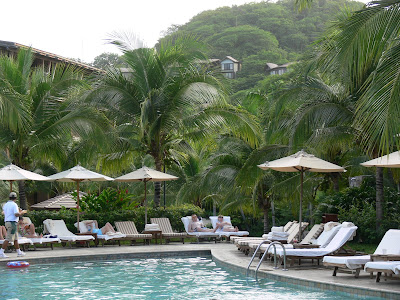 Rooms at the Four Seasons are very expensive. I tried a few dates on the hotel's website during the winter and spring tourist season and the cheapest room rate I could find was $895 USD per night, although there are packages where you can get the fifth night free. During the summer I could find a $675 rate, and during the off season in the fall it costs only $485 per night. Of course the suites are even more and villas or private residences can cost several thousand per night.

The local newspapers in Costa Rica will occasionally carry items about Hollywood celebrities who vacation at the Four Seasons Papagayo. They obviously enjoy the privacy that such a facility offers. On my flight last summer from the nearby international airport in Liberia to the U.S. on our plane was one of the all-time great NBA basketball stars with his entire family returning from spending a vacation at the Four Seasons for the second year in a row. (Although he was gracious and posed for photos with other travelers, I prefer not to name him out of respect for his privacy.)

The investor group that owns this hotel includes Bill Gates and Middle Eastern oil money. The investment to develop this private world on the Papagayo peninsula was considerable, so it should be no surprise that the owners are those with access to huge amounts of capital to invest.

Tomorrow I will show the pool at a resort in Tamarindo for contrast, and then the day after tomorrow I will return to the Four Seasons to show the hotel lobby bar, and will thereafter show some aerial photos of the Papagayo peninsula.
Posted by Dave-CostaRicaDailyPhoto.com at 2:55 AM

Yay--I'm happy to see the photo of the resort in a non-commercial way, and I still love it.