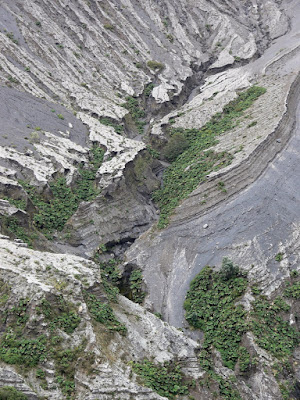 At the end of last week there was a terrible 6.2 magnitude earthquake in the central valley area of Costa Rica, 35 km. northwest of San Jose. That is a long way from Tamarindo, more than a 4 hour drive, and the earthquake could not be felt in Tamarindo. It caused extensive destruction and the tragic loss of life near the epicenter, with the Red Cross listing 19 dead and 89 missing, as of yesterday's newspaper.

Thousands were left without water and electricity and lived in areas cut off by damage to roads and bridges. The epicenter was 15 km east of Poas Volcano, one of the most-visited national parks in the country.

I do not have a photo of the earthquake scene or damage, but to illustrate the earthquake I am posting the photo above of the cracks in the earth's surface near the crater of Irazu Volcano, another large volcano near San Jose. Irazu is the largest and highest volcano in Costa Rica, with an elevation of 3,342 meters, or 11,260 feet. I do not know the geological explanation, but I assume that there is some connection to the fact that there are earthquakes and volcanic activity in Central America. 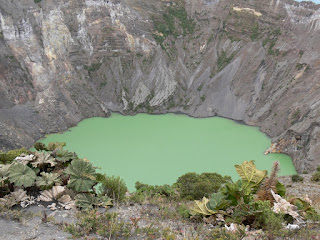 Earlier I posted photos and information about Irazu on October 6, 7 and 8, including
this link to a post that showed this photo of one of the 5 craters in the park.
Posted by Dave-CostaRicaDailyPhoto.com at 3:40 AM

I remember reading that earthquakes are very common in Costa Rica with tremors happening all the time. However, such large quakes are rare.

These photos are beautiful. And scary. I'm glad you and your family are far from where the earthquake was.

So tragic. It seems the most beautiful places are prone to these types of occurences.