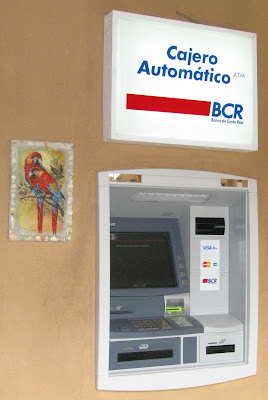 Today's photo also shows a painting of two macaws, surrounded by a frame of sea shell pieces, to decorate the wall next to the outdoor automatic teller machine.

If you enlarge the photo and look closely at the painting, you will also see that the artist wrote the words "Costa Rica" on the painting. I suspect that the artist did so not because he or she felt that people needed to be told what country they are in, but as a reflection of national identity or pride. After all, in how many places in the world would they decorate an outdoor wall next to an automatic teller machine with an original painting of tropical birds?

To me, this painting next to an ATM machine is another way of reminding visitors, like Dorothy did in The Wizard of Oz, that "We're not in Kansas anymore."

One other comment is in order about the Plaza Conchal shopping center murals that I have posted recently. Isn't it refreshing to see art that is not graffiti painted on outdoor walls in public spaces? Graffiti is not a problem in Tamarindo, unlike urban areas around the world.

While we are on the subject of graffiti, I would like to share a story that I think is a nice reflection on Costa Rica. About two years ago some graffiti appeared on places like roadway bridges in the area. The graffiti was the same stencil design, painted in white, that showed a skull and the word "Gringo." The local newspapers carried articles about how Costa Ricans were worried that the graffiti might make North Americans feel that they are unwelcome or resented, which is certainly not the case.

A later article reported that they caught the people responsible for the "gringo" graffiti. They were a couple of young Americans who were promoting a product. As an American, I felt embarrassed. We are visitors to Costa Rica, we use their public services, and then a couple of Americans defaced the areas they painted and created the appearance of conflict between Ticos and North Americans.

Incidentally, the word "gringo" does not have the same negative connotation in Costa Rica as it usually does when used in Mexico. Costa Ricans are a genuinely friendly, welcoming and tolerant people. Their attitude towards life is summed up in the national expression: "Pura Vida." It literally means "pure life," but it is used by Ticos in a similar way that Hawaiians use "Aloha." It can be used as a greeting, as a way of saying goodbye, best wishes, or all is well.
Posted by Dave-CostaRicaDailyPhoto.com at 2:55 AM

As a former banker, I think all banks should do this. How lovely.

Something pretty to look at in case there is a line to wait in. Interesting about the graffiti.

Sharon,
Your comment encouraging more banks to include art in their public areas reminds me of the artwork in front of the headquarters of the Bank of American in San Francisco. It is a very large sculpture that looks like a smooth black boulder. Some people refer to it by the nickname "banker's heart."