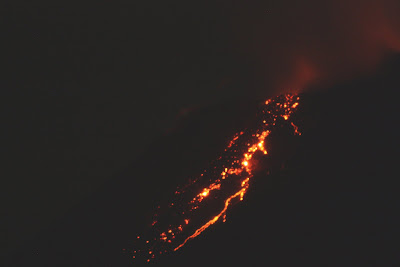 On clear nights, this is the view up the mountain of lava flowing down the side of Arenal volcano. I don't think any words from me can add to this sight.

Here is a link to the Google maps aerial satellite photo of Arenal volcano. If you enlarge the satellite photo, you will be able to see the red lava inside the crater.

Volcano monitoring is very important, as Arenal volcano erupts most of the time, but the lava flows stay within the boundaries of the two national parks that encompass the volcanic craters. If the eruption increases, however, nearby hotels, restaurants, farms, and towns could be threatened.

Volcano monitoring made the news this week. In the Republican speech as a rebuttal to President Obama's address to a joint session of Congress, Louisiana Governor Bobby Jindal criticized the spending in the economic stimulus law, and he said that volcano monitoring equipment was an example of the wasteful spending. It seems odd for a Governor of Louisiana to be criticizing preparedness for natural disasters.

Volcanoes are serious business. When the USA installs the new volcano monitoring equipment in the volcanoes in the USA, maybe they can send the existing equipment down to Costa Rica if it is still useful.

By the way, since I mentioned foreign aid from the USA, this gives me an excuse to say that Costa Rica is grateful for the aid that it receives from some foreign sources, including monetary system support and aid for the victims of the earthquake a few months ago. Two decades ago, Costa Rica's commitment to peace caused it to lose most of the foreign aid that it could have received.

In the 1980's, the Reagan Administration offerred lots of money to Costa Rica in exchange for using Costa Rican territory to train contra rebels to attack the Sandinistas in neighboring Nicaragua. The President of Costa Rica, Oscar Arias, instead went to Nicaragua and brokered a peaceful solution to the conflict. The USA lost interest in giving the large amounts of aid to Costa Rica, but Oscar Arias was awarded the Nobel Peace Prize. Oscar Arias is again the President of Costa Rica today, and his receipt of the Nobel Peace Prize is a source of national pride in such a small country.

Costa Rica's commitment to peace and the abolition of its military in 1949 is a man-made wonder in a country most known for natural wonders, such as Arenal volcano.
Posted by Dave-CostaRicaDailyPhoto.com at 5:03 AM

Great photo! It looks beautiful as well as dangerous. Thanks for detailed informations!

Magnificent and frightful all at once. Great info on a peaceful country.

Great photo, I would think a bit scary if one can get a close up like this.

I'm appalled at myself that I knew nothing of Oscar Arias - his name sort of rang a bell, but that's all. How little we know sometimes of what goes on in other countries - things we should know. How very sad and how appalling that a peaceful country then doesn't get aid! Grrrrrrrrr

Message on Monte C for you...

What a beautiful sight. The link was really neat.

This is what I saw! I'm so glad I have stayed there for the night! :-)

When I was a little bit younger, I stood at a rainy night in front of the Arenal, murmuring to an american couple: Please, just one little erection... I meaned eruption.

Well, I am not an english native speaker

It is so beautiful. I was there about ten years ago. Loved it!

Wow! Somehow, I'd be scared to death. Stunning photo!

Beautiful picture! I'm planning on visiting CR in a few weeks and Arenal will definitely be a stop. Do you know which side the lava flows this year? Where is the best hotel to see it at night? Thanks in advance.