Huge tree, and 7 million more on the way 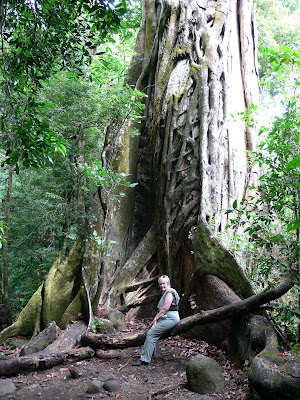 This tree is along a trail in Rincon de la Vieja National Park, the same park as shown in the photos of the bridges and streams that I have shown during the past week.

The biodiversity of Costa Rican cloud forests is illustrated by something that I read recently about Monteverde, Costa Rica. In 10 square miles (26 square kilometers) of the Monteverde cloud forest, there are as many different plant species as there are in all of the USA and Canada combined. I find that stunning.

Many of the trees were planted by school children who participate in the country's "A que sembras un arbol" program, which translates as "Bet you will plant a tree." This is part of Costa Rica's commitment to become the world's first carbon neutral country by 2021.

1.3 million of the 7 million new trees were planted in Guanacaste, the northwest Pacific region where Tamarindo is located. The tree planting program is in part to reverse some of the effects of the deforestation of parts of Guanacaste that occurred during the Spanish colonial period, when large cattle haciendas were created. The cattle raising in the area has continued to the present day, although it is now on the decline.
Posted by Dave-CostaRicaDailyPhoto.com at 2:55 AM

This post will probably make my day. It is the best I have seen dealing with our planet and its fragile ecosystem. I love trees and at first I thought this was going to be a post about Costa Rica cutting down its forests and selling the wood to Japan.

I was absolutely stunned and extremely happy to read that your country and government are in the habit of planting millions of trees. It is something that all of the governments of the world should do as this planet is not is the best of shape and trees or monumental forests of bamboo would assist in our planet breathing.

Really nice to see Sharon by this gorgeous huge tree! :-)

I remember this hike very well. It was quite the adventure.

Great shot and wonderful to read about such a forward thinking place.

I got to thinking that I should have been a little more descriptive about the adventure that day. Starting with horse-back riding over rocky terrain, climbing down (and back up of course) to a fantastic waterfall, hiking what seemed like miles over very steep, rocky and barely visible paths, making our way over streams (without bridges), encountering all kinds of wild animals and one poisonous caterpillar. Observing bubbling fumaroles and boiling and steaming streams. And, all that on an empty stomach! I think we both slept on the ride back to Tamarindo.

Great photo to show of Sharon and this magnificent tree. And Sharon's description of the day she and I had for this hiking adventure is exactly accurate. I have never hiked so much in one day and seen such a variety of areas. Great day though! It really was reflective of all of the wonderful flora, fauna, and critters that Costa Rica has to offer.

Julie and Sharon,
Since you have left comments about your full day of activities during which this photo was taken, I will post another photo tomorrow about one aspect of your day trip to Rincon de la Viaja that you left out of your description of your day.

This post makes me want to go on a half day hike the next time I'm down there.