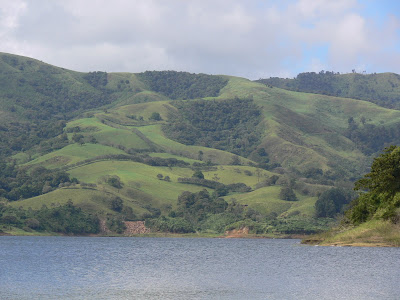 This is one small section of Lake Arenal, a large lake surrounded by lush, green hills, forests and pastures at an elevation of 530 m. (1,800 ft.). The lake is 124 square km., or 48 square miles, Costa Rica's largest inland body of water. At the eastern end of the lake is a rain forest leading to Arenal Volcano, a spectacular sight that I will show in a few days.

There are tourist activities in the area, including hanging bridges and a sky tram through the rain forest, horseback riding, windsurfing, botanical gardens, bird and wildlife cruises on the lake, fishing (particularly bass fishing), hiking, mountain biking, and more.

The lake was created in 1973 by an earthen dam that is 56 m. (184 ft.) high and 88 m. (288 ft.) high. It generates s significant part of the country's electricity, and 70% of Costa Rica's electricity is generated from hydro power. There are also wind turbines in the area to generate renewable energy.

Laguna de Arenal, as it is called in Spanish, is located in the eastern part of the Guanacaste province that includes Tamarindo and comprises northwest Costa Rica, which places it in the north central area of the country.
Posted by Dave-CostaRicaDailyPhoto.com at 3:50 AM

What beautiful folding land with such variety of vegetation. Thank you for sharing it with us. Nice shot!

A nature paradise, glad it has an infrustructure for tourist, this is the better of two evils to ensure it remains unspoilt

Gorgeous hills, all green and lush.

very nice blog! and great photo! I like nature and waves of Costarica and South America!
Luis

Thanks for your lengthy response to my remarks re. the growing and harvesting of bananas. Yes, it is a complex issue, and too often the culprits behind unsafe working conditions can be laid at the feet of those who are too eager for profits at the expense of the workers health. And dare I mention the fact that historically corporations in the (whisper) USA have been some of the greatest offenders. Hmm! Is this becoming too political?!

I really like the low contrast of this photo.