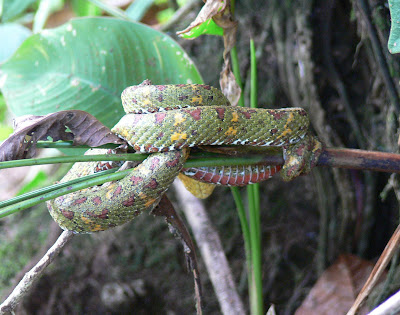 This is a deadly poisonous eyelash pit viper. Usually when visiting Tortuguero, visitors see wildlife from the safety of boats that cruise the waterways. If you venture on foot into the tropical jungle, you may see scenes such as this eyelash pit viper.

My Traveler's Wildlife Guide book on Costa Rica says "Few short term visitors to Costa Rica encounter a poisonous snake because most are well camouflaged, secretive in their habits, or nocturnal and, therefore, they are really outside the scope of this book." Well, I was in Tortuguero for only a few days, and this is what we encountered.

These snakes have hollow fangs that inject venom in their prey. The venom attacks the nervous system, causing paralysis, then respiratory failure. The most dangerous and feared pit viper is the Fer-de-lance. They are more aggressive than other snakes and are more likely to strike and attack rather than retreat when approached. There is a story of a railroad worker in Honduras who was bitten by a Fer-de-lance at work and was carried home. His wife tended to his wound. He died within two hours and she died the next day because she had a cut on her hand from cooking and the little bit of venom from touching his wound that entered her cut was lethal.

Sorry, I did not get in closer for a tighter shot. I did maneuver around the snake draped across this branch, and tomorrow I will show a photo of this snake from another angle and will give more information about pit vipers. I know that I am in dangerous territory when I write about snakes. I risk that my son, Stuart, who knows a lot about snakes and other reptiles (and has a snake in his Scottsdale condo), will probably leave a comment correcting the details of whatever information I try to share on this website.
Posted by Dave-CostaRicaDailyPhoto.com at 2:55 AM

wow! incredible! thank you for the info.

I'm not sure whether spotting this snake makes you lucky, or unlucky. But we are fortunate you made it out to tell the tale and share the photos.

Okay, this is a little too scary for me! Yikes!

this snake has such great color and pattern. it is unfortunate it is so dangerous. i still like rattlesnakes because they at least give you a warning with a rattle.

Not something i would want to step on. Wow.