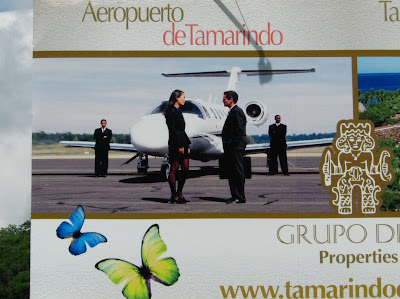 I have shown some photos of the Tamarindo Airport recently. Here is a billboard promoting the airport. You will see that Madison Avenue has nothing on Costa Rica for creating advertisements that project an attractive and sophisticated image for a location.
The typical traveller arriving at the Tamarindo airport is a tourist in shorts and a tee shirt. The Tamarindo Diria Resort, which owns the airport land and adjacent golf driving range where this billboard is located, evidently did not want to show typical tourists in their billboard promoting the airport.  Instead, they showed a smartly dressed businesswoman and businessman, and two guys who look like body guards.
I don't think I have ever seen anyone in Tamarindo wearing a business suit. If anyone in Tamarindo did wear a suit, it would certainly not be a dark suit like you see in this advertisement. If I were ever to see a suit in Tamarindo, I would expect it to be a seer sucker or light khaki summer suit. It would be the type of suit that you would see in an old James Bond movie being worn by a sweating older guy in a tropical locale who briefs James Bond on what the bad guys have been up to in that location, about a day or so before the guy gets killed.
Sorry to inflict you with my stream of consciousness planning for these posts. We have gone from the airport in Tortuguero, to the airport in Tamarindo, to the billboard for the airport in Tamarindo, and I think tomorrow I will develop the billboard advertisement theme a little more.
Posted by Dave-CostaRicaDailyPhoto.com at 2:55 AM

Maybe they can develop a 'before and after' campaign. This would be the 'before' shot.

Something tells me that photo for the ad was not photographed anywhere near Tamarindo.

The billboard is quite funny really. Enjoy your James Bond references!

I totally agree with you (and the two men in background at sides of the plane seems body guards. LoL)

Great post, like the James Bond comments. Never even seen a black suited person in any beach city of Costa Rica. And that picture was taken not at the airport. Hummm from Tico Times Directory/Blog

City is great to travel blogs. These blogs, I learned a lot. Great photos. I respect your effort. Best regards.