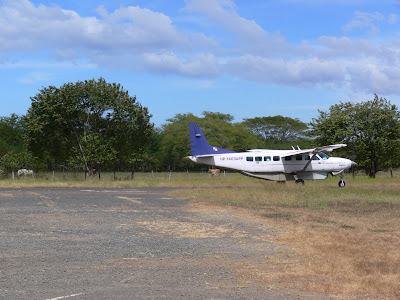 Here is a domestic commuter airplane taxiing down the runway at the Tamarindo airport. If you click on the photo to enlarge it, you will see the cows grazing on the airport grounds.

If this does not fit your image of what you expect a municipal airport to look like, please keep in mind that you are in Central America, not the USA, Canada or Europe. It is actually quite an accomplishment that Tamarindo has an airport with regularly scheduled service on two domestic airlines.

Although Tamarindo is Costa Rica's most popular beach resort (as described by Forbes Magazine), it is still a small town. There was no church until last year. There are no traffic lights and no gas stations. How many towns can you think of that have an airport but no traffic light or gas station?

The airport is located on private land, owned by the Tamarindo Diria Resort, which is the largest hotel in town. (One of our two condos is located on the grounds of the Tamarindo Diria Resort.) If you think it is odd that an airport is on private land rather than municipal land, I should also add that the nearest municipal government is in Santa Cruz, which is about 20 minutes away.

Most people who visit the area fly to the international airport in Liberia, which is about an hour away. The government is building a new terminal in Liberia to handle the grown of air traffic there, as there are about 50 non-stop flights each week from the USA to Liberia. It is also convenient to fly to San Jose and then take a one-hour domestic airline right to Tamarindo. The Tamarindo airport is located just 5 minutes from the center of town.

Before you conclude that domestic air transport in Costa Rica is modest, let me give you this teaser. Tomorrow's post will reveal that a Costa Rica airline is the first in the world to accomplish something that is beneficial for everyone, everywhere, and that will be copied by airlines worldwide.
Posted by Dave-CostaRicaDailyPhoto.com at 2:55 AM

The airport does look a little rough around the edges. I hope the cows stay off of the runway.

your posting may get you drowning in tourists, you know what happens next. ya gotta move!

we're thinking of visiting Costa Rica. Our daughter spent some time there and says that surfing is incredible on the coast.

Interesting post, filled with facts and names of places that inspire 'flight'. Was the plane parked or still moving when you shot this?

very nice explanation of the surrounding area and the commuter airport. Although there is a large major international airport in Liberia, which is under one hour drive time away from tamarindo. I like the cows grazing in the pasture beside the runway. very peaceful.

Brattcat,
The plane was moving when I took the photo. I wanted it to taxi down far enough to show the cows in the background, who obviously are used to the airplane noise.

This reminds me of a trip that a friend of mine took to a village in Mexico. The pilot had to buzz the runway to get the cow to move before he could land.
I see these are fenced in. It all sounds very peaceful.

I enjoyed this photo. I have not seen cows on runways but I have seen runways in cornfields. That is odd to come down in. You think you will end up popping along like pop corn if the plane mows down the corn. There is just enough room for the wings.

Love the cows. At least they are confined behind the fence, unlike Jarats experience.

I think I agree with Steffe and Abe. I prefer what you call "modest" airports. At the turn of the 20th century, cows watched trains, now they watch planes.....