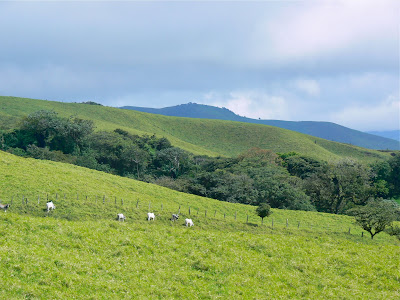 This is another pastoral scene of the mountains and valleys of central Costa Rica. I took this photo between Monteverde and Arenal. You can see why Monteverde is known for its cheese, as this is excellent territory for dairy cows.
If you didn't know that this was from Costa Rica, I bet you would not look at this photo and think it was taken in Central America.
As I have mentioned in my posts a long time ago, Monteverde was settled by American Quakers who fled the USA in the late 1940's because they feared that they were going to be drafted for the Korean War, which was against their religion. They were attracted to Costa Rica because Costa Rica abolished its military. They settled in Monteverde and went into the business of making cheese, which is sold throughout Costa Rica.
Cheese was good product because it could be transported over the mountainous terrain. When they first started the business, they used for cheese molds the round cardboard Quaker Oats containers.
This week we are showing photos of Ek Balam, a unique but lesser-known Mayan site in the Yucatan Peninsula of Mexico, on our Viva la Voyage site.
Posted by Dave-CostaRicaDailyPhoto.com at 2:55 AM

You're right, Dave. I would never have guessed this image was taken in Costa Rica. It has a very European feel to it. Very, very beautiful.

This surprises me. I'd not have expected Costa Rica to look like this. I imagine jungle and exotic creatures.

Looking forward to your Theme Day post after your message on Menton DP!