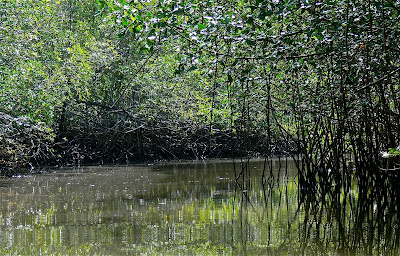 Contrast this scene with yesterday's post. This is the same Tamarindo Estuary. Yesterday's photo showed a broad expanse of open water. Today's photo is a narrow passageway with vines hanging down into the still water.
The broad estuary near the ocean narrows as it splits into countess fingers that snake inland into a mangrove forest that provides habitat for wildlife.
Tamarindo is bordered by the Tamarindo Estuary on the north and the Langosta Estuary on the south. Some people have proposed that a road be constructed along the beach, parallel to the ocean, to connect all of the beach towns in the area. to be known as the Ruta del Sol. Although it would be drive from town to town along the ocean, it would be very expensive and harmful to the environmental to try to build a road across the estuaries. I doubt that it will happen.
This week we are showing photos of Dubrovnik, Croatia, on our Viva la Voyage travel photo site. If you have not been there, the photos are particularly worth a look.
Posted by Dave-CostaRicaDailyPhoto.com at 2:55 AM

It looks so serene! I wonder what kinds of critters are lurking around there.

From your comments, I understand that Costa Rica is very in tune with environmental needs so, I agree that road will probably never be built.

It does look quiet but I wonder what creatures lurk there.