What the men and oxen in the river were doing 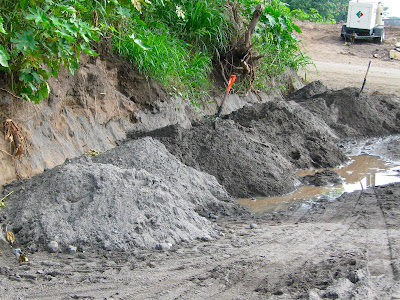 This photo shows why the men were in the river with their ox cart. They were digging up sand from the river bottom, hauling the wet sand in the ox carts out of the river bed and up the embankment to the area from which I was taking photos, and then dumping the sand.
The sand is evidently used for mixing with cement for concrete for construction. I was told that the crew with the oxen get the equivalent of $8 US dollars for each ox cart load of sand.
I don't know about you, but it seems like a lot of work (for the oxen as well as the men) for $8. The average income in Costa Rica is about $10,000, which is more than triple the average income in neighboring Nicaragua. The most difficult and low paying jobs in Costa Rica are done by Nicaraguans. Perhaps as much as 20% of the people in Costa Rica are Nicos, many of whom came across the border without going through immigration procedures.
We are showing photos of one of the world's most elegant hotels, Villa d' Este, on the shores of Lake Como, Italy, on our Viva la Voyage travel photo site.
Posted by Dave-CostaRicaDailyPhoto.com at 2:55 AM

That is very hard and time consuming work.

I agree, that is a great deal of work for only $8. I wonder how long it takes to get one load onto the banks of the river.

We should probably evaluate the work and the wages in Costa Rican terms, not our own. In the US, we might not think that is much money for a lot of work, but maybe down there it is good and the workers are happy to get it.