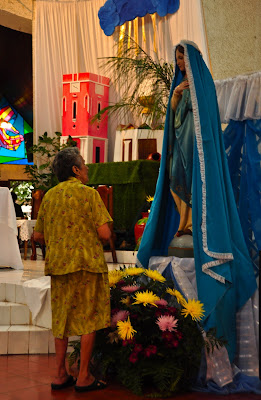 During the intermission between the speaker and the band in the church, this woman approached the figure to the right of the altar and stood there for several minutes of quiet contemplation. She reached up and touched the figures robe very gently several times.
The area behind the altar is in the background of the photo is another non-traditional aspect of the design of this Catholic church. The crucifix is not on the altar. It was in a large glass case on the floor to the left of the altar. I cold not get a photo of it because there was too much reflection of light from every angle.
Behind the altar is a model of the old church bell tower, which I showed in a photo a few days ago.
Tomorrow I will show my favorite photo from inside the church.
We are showing photos of Bellagio, Italy, and Lake Como this week on Viva la Voyage travel photo site. Come see the scene that inspired a Vegas casino.
Posted by Dave-CostaRicaDailyPhoto.com at 2:55 AM

A beautiful portrait of that woman admiring the Virgin Mary complete with the church flowers!

they really do seem to be communicating with each other.

I've been scrolling down through your church photos...very interesting. Also an indication that the Roman church is not as monolithic as is sometimes thought.

Except for the statue, the background doesn't make me think of a church at all.

Just had a chance to look at your church pictures. From the look of the drums I'd imagine this would be a pretty upbeat service.

This is a nice series of pictures of this beautiful church. Thanks for sharing!

The flowers in that arrangement are the size of my hand!