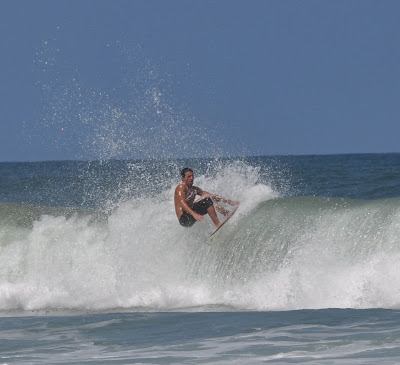 All good waves must come to an end.  When this wave broke, the surfer found himself airborne in a shower of ocean spray.

Langosta Beach maintains its International Blue Flag certification for clean water.  If you're going to be in this much contact with the water, it should be clean.

Costa Rica takes the cleanliness of its water seriously.  Several years ago environmental authorities shut down a new Spanish-owned hotel in the middle of the tourist season because they discovered that one of the buildings was not hooked up to its sewage treatment system.  The several hundred evicted guests did not complain about the government's action because they realized it was the right thing to do, even if they were inconvenienced.

We have photos of the wildlife of Africa posted on our Viva la Voyage travel photo site this week.
Posted by Dave-CostaRicaDailyPhoto.com at 2:30 AM

I heard a story that was quite the opposite about some environmental conditions in China this morning on the radio. Citizens who have complained about the pollution have been jailed.

I bet that surfer would love to have this set of pictures.

Good for Costa Rica. Smart policy in the long run for tourist as well as community.

I am still looking for a photo of an employment lawyer surfing.

Surfing is s sport that you can enjoy watching even when the players fail.

Now you have that 60s Surfaris tune playing endlessly in my head.