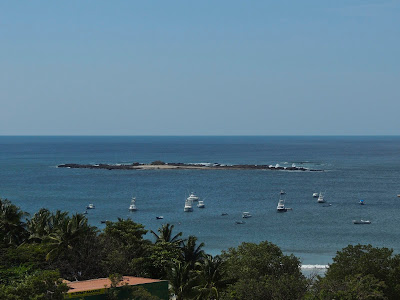 This photo shows Capitan Island, which shelters the southern end of Tamarindo Bay.  The island is just north of San Francisco Point, which I showed two days ago.

In Spanish, Capitan Island is called Isla del Capitan.  It takes its name from a legend that a captain of a ship that wrecked on rocks off shore swam to the island for safety.

The island is a place where people can swim or kayak.  It is very small and almost disappears at high tide.  It provides a safe place for boats to be moored in Tamarindo Bay, as is shown in this photo from the walkway in front of our Diria condo.

This week we are showing photos from Cabra Castle, a castle-hotel northwest of Dublin Ireland, on our Viva la Voyage travel photo site.
Posted by Dave-CostaRicaDailyPhoto.com at 2:30 AM

Wow, amazing view of Capitan Island. I had never heard about this. thanks for sharing with us.
Great account.

I don't remember seeing this island at all when I was there.

Everything sounds so much more romantic in Spanish!

You have some amazing views from your condos Dave, how do you ever drag yourselves away?

What a beautiful place Dave. Wish I could see it in person.
V

A picnic on Capitans Island at high tide would be tricky.

It looks like a great place to sun and picnic.