Bat, Up Close and Personal 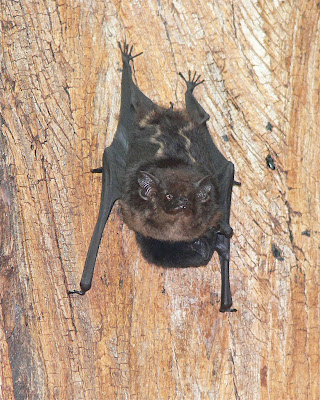 Here is your chance to count the toes on a bat. I warned you that some of the animals on our estuary tour might not be attractive, and I trust you will agree that I kept my word. (Tomorrow's photo will be of a cute animal. I promise.)
I have never seen a bat flying in Costa Rica, but there are a few trees in the forest where bats perch during the day. Our guide on our Tamarindo estuary tour led us past a dead tree where some bats had perched on the inside of the hollowed out trunk.
Naturally, I had to walk close to get a better view for a photo. The hollowed out tree trunk was rather dark, so I used a fill in flash, which explains the shadow on the tree trunk in the photo. My flash disturbed the bat, and when he moved, there was an abrupt end to the bat's photo session.
This is a greater white-lined bat, also called a white-lined sac-winged bat. You can see their distinctive white lines on their back in this photo. I do not know if the white stripes are usually in a zig zag pattern, and I do not intend to go searching for other bats to find out.
It is interesting how different cultures around the world have associated bats with evil. Even the aborigines in Australia have a legend about how the first man and woman on earth encountered a bat that was guarding a cave. They had been warned to stay away, but the woman approached the bat it flew away, leaving the cave open. The cave was the cave of death, and without the bat to stand guard, death was unleashed into the world.
My wife and I have a painting in our house by an aboringinal artist depicting the aborigine story of creation, which involves two snakes. We will not be adding any paintings showing the bats of death.
One other bit of trivia about bats is that some bats seem to be afraid of predators, such as owls and even other bats, as they stay at home and are afraid to fly during a full moon. White-lined bats such as the one in this photo are not one of those, however, as they will fly around during a full moon.
The white-lined bats are only 5.5 cm (2 inches) long. They are locally called murcielago del saco, and the scientific name is saccopteryx bileneata.
Posted by Dave-CostaRicaDailyPhoto.com at 2:55 AM

Yucko! Great capture of Mr. Bat! But, they eat a lot of insects!

Fantastic shot of the bat. He looks a little fuzzy to me. They may be ugly but they do keep the bug population down.

Great picture, and I loved reading your text, too. Although I guess I'm one of the few people in the world who thinks bats are actually pretty cute!

Ick! he looks interesting but sort of ugly. He does look like he has a razor haircut design on his backside. we do need bats though and i like to watch them fly around.

Poor thing! It's not their fault is they are ugly :-)

In Texas, in certain areas, bats would fill the skies in early evening. Drove me batty!