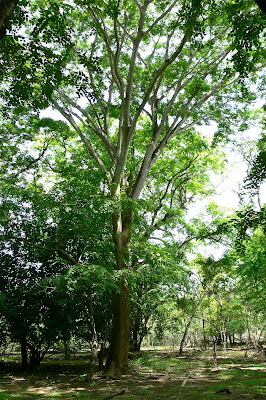 The national tree of Costa Rica is the guanacaste tree, also called an ear tree because its seed pods are the shape of an ear. The northwest Pacific province of Costa Rica where Tamarindo is located is also named Guanacaste. 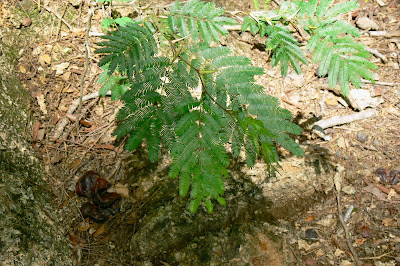 Guanacaste trees are tall, reaching heights of 35 - 50 meters (115 - 165 feet). In the coastal plains, they typically have an umbrella shape to their branches and leaves, but the tree that I have shown in the forest in Las Baulas National Park had to grow tall to find sunshine.
The bottom photo shows the shape of the leaves, as it is a small guanacaste tree that has grown from a seedling. There are the remnants of a couple of the ear shaped seed pods in the shadow on the ground. I apologize that they are not shown well in the photo, as I was focusing on the leaves, not the ground.
Guanacaste trees drop their leaves during the dry season from November though April in order to conserve their moisture. I too these photos at the end of May, after the tree had about a month to green up with the occasional rain during that season.
By coincidence, I am showing Costa Rica's national tree on Costa Rica's Independence Day, September 15, Costa Rica is, I believe, the only Latin American nation that did not have an independence movement.
When Guatemala declared independence in 1821, it included Nicaragua and Costa Rica as well. No one in Costa Rica knew they were independent until October 13, when a messenger arrived and surprised the people with the news that Costa Rica was its own country and they would have to govern themselves. Costa Rica had been largely ignored by the Spanish because there was no gold. (It was given the name Costa Rica, or "rich coast," by mistake, as the gold worn by the natives who greeted the early Spanish explorers came from somewhere else) Costa Rica had been described as the poorest colony in the entire Spanish empire.
A few years after independence, the Guanacaste region of northwest Costa Rica, had an election in which the people voted to join the new country of Costa Rica rather than Nicaragua.
For English speakers (like me), I should point out that the "e" at the end of Guanacaste is pronounced; it is not silent "e." The scientific name for the guanacaste tree is enterolobium cycloarpum.
Posted by Dave-CostaRicaDailyPhoto.com at 2:55 AM

Beautiful tree. The leaves look like our mesquite tree leaves.

this is beautiful thanks for the great narrative

Wow, that is really a tall tree. Very beautiful.

Any chance of a picture of the "ear" seeds.

It's a gorgeous tree.

The Costa Rican National Capoeira team demonstrated their competitive abilities in a world-class demonstration for the public. With grace and movements that you have to see to really appreciate, these young competitors impressed everyone. For more information visit here: http://www.costaricaviews.com/costa-rican-national-capoeira-team/