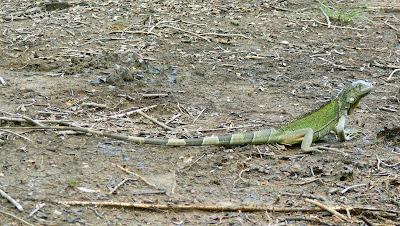 No walk through the forest in Costa Rica would be complete without an iguana. You don't have to go far to see iguanas. In fact, you don't even have to go into the forest. They are in town, along the roads, and even along the beach. They are harmless and leave people alone. They spend most of their time in trees. Their diet consists most of leaves, which probably explains why they are motionless most of the time and slow moving the rest of the time. Leaves are not a good source of nutrition for an animal this large.

This green iguana, also called a common iguana, is a classic of his species. This one is green, but often green iguanas are brown. They typically have a very long tail, and this one's tail looks to be about three times the length of its body. They reach about 2 meters (6.5 feet) in length. The color bands on its tail and the crest on its back are also characteristic of green iguanas.
The local name for iguanas in Costa Rica is garrobo. The scientific name is the rather uncreative iguana iguana.
Posted by Dave-CostaRicaDailyPhoto.com at 2:55 AM

This fellow is quite a beauty.

A real friendly fellow.'m surprised that with the number of iguana that can be found in countries bordering the US and on the islands, and with the number that have been brought here as pets, that we don't also have them greeting us on sidewalks and in parking lots everywhere. They are amazing creatures and do seem to ignore humans totally.

Very pretty! I came across a comodo once, in Papua New Guinea, not as pretty as this one, and far more dangerous.

Good looking iguana. You could easily pass by him and not see him I would imagine.

We had many of these living in our large sapodilla tree in our backyard in FL. This guy is just a young one - the older ones get really big and thick and turn orange and have a big scary flap under their chins. They look even more pre-historic than the young ones. Great capture, Dave.