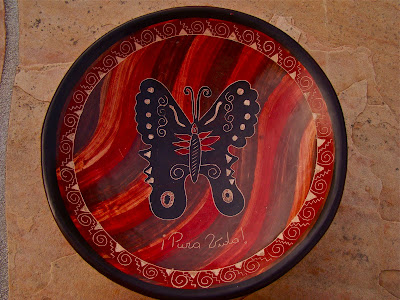 This is another example of Chorotega pottery made in Guaitil, Costa Rica, about a half hour inland, or east, from Tamarindo.

This is a more contemporary design, made to appeal to tourist tastes, rather than the more traditional design that I showed yesterday. The pattern around the border of this bowl looks traditional, but I doubt that in pre-Columbian times the indigenous people of Costa Rica made pottery with butterflies against a swirling background, and I am positive that they did not write expressions such as "Pura Vida" on their pottery.

Pura Vida is the national slogan of Costa Rica. It is Spanish, of course, for "pure life." Costa Ricans, who are also called "Ticos"use "pura vida" in ways similar to "aloha" in Hawaii. It can mean hello, good bye, all is well, I'm fine, or just about any other friendly greeting. It sums up the national attitude that helped make Costa Rica ranked number one as the happiest nation on earth, according to a major study by a foundation in London.
Posted by Dave-CostaRicaDailyPhoto.com at 2:56 AM

I definitely like the design of the pot yesterday better. And I love that national slogan and greeting! Very positive.

I like both yesterday and today. This is the second time we've seen the butterfly motif. Do you have a theory?

Pura Vida, one of my favorite phrases.

This is a beautiful bowl. I would have bought this one myself. Do you know if the clay, paints and finnish they use is safe for serving food or are they just decorative?