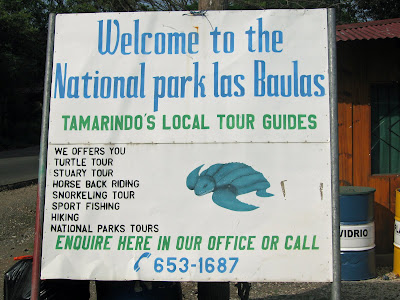 When I began the series of aerial photos of the Tamarindo area taken from the gyrocopter a couple of weeks ago, I showed a few photos of the Tamarindo estuary. The estuary is part of the Las Baulas de Guanacaste National Park, which also includes the leatherback turtle nesting grounds on Playa Grande and a marine sanctuary in the waters off shore.
This is the sign for the La Baulas National Park posted on the side of the road as visitors enter Tamarindo. The park office is only about 2 minutes form the center of Tamarindo. You can walk along the beach from the main part of Tamarindo beach to the entrance of the Tamarindo estuary.
As shown on this sign, there are a variety of activities in the park. I will next share with you a series of photos from the estuary tour. The turtle tours mentioned on the sign are led by park rangers at night during the nesting season from October to March.
The park and estuary form the northern border of Tamarindo. The park protects 379 hectares (936 acres) of land and 22,000 hectares (54,000 acres) of ocean habitat.
Las Baulas translates to English as the leatherbacks. THe full name of the park in Spanish is Parque Nacional Marino La Baulas de Guanacaste.
Posted by Dave-CostaRicaDailyPhoto.com at 2:55 AM

I think if I lived there I would spend a lot of time in that park. Do you?

I'm looking forward to more on this park.