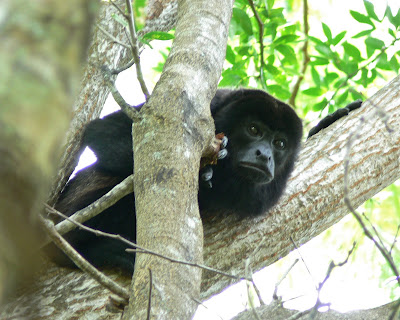 This howler monkey remained perched on a branch just above us as our group of about 8 tourists walked through the forest in Las Baulas National Park on our Tamarindo estuary tour.
There is something very unusual about this howler monkey. No, it is not unusual to see howler monkeys in Costa Rica. And it is even more common to hear them. But this howler was perched above our trail all by himself. I have never before seen a solitary howler monkey, as they are almost always in packs of between 10 and 20 monkeys.
Our guide told us that there was a pack of howler monkeys living in the woods nearby, but we did not find them. We don't know how or why this howler was separated from the group.
The low roar of howler monkeys can be can be heard at a distance of 3 km (1.8 miles) in the forest or 5 km (3 miles) across the water. That is not a typo. It is amazing for such a huge sound to come from such a small animal. They are typically 55 cm (22 inches) long, and weigh between 4 - 7 kg (9 -16 lbs). That makes them the largest monkeys in the western hemisphere.
My wife, Julie of Scottsdale Daily Photo, is running an extraordinary series of photos of her trip to a slot canyon in northern Arizona. I highly recommend checking it out. This week we are showing photos of the polo scene in Buenos Aires on our Viva la Voyage travel website.
Posted by Dave-CostaRicaDailyPhoto.com at 2:55 AM

Interesting information and terrific photo. I, too, wonder why this one is solitary. Must be a story behind it. I prefer today's post over your photo yesterday. Yes, I know that bats are helpful creatures, but I, nonetheless, do not care for them.

Maybe that monkey is climbing around solo because he forgot to take a shower??

He is a cute littl guy!

Howler monkeys are my favorite! I love hearing them.

What a cute little guy! Hope he finds the rest of his group. Bat info yesterday was very interesting, especially right before Halloween.