A wave about to break 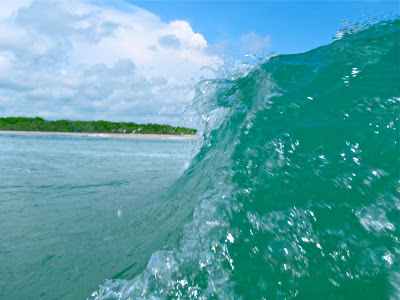 Here is a wave about to break as it rolls in towards Langosta Beach, near one of our condos. I took my little waterproof camera out into the surf to see what type of photos I could get.
My success rate for photos worth posting was rather low, as it was hard for me to hold the camera still when I was being sucked into the curl of a wave and was about to be tossed back down.
It was a fun experiment with the waterproof camera. I will show a few more attempts during the next few days.
On our travel photo site, Viva la Voyage, this week we are showing some from Merida, the largest city in the Yucatan Peninsula of Mexico, which has retained some of its Spanish colonial charm and has a museum that showcases the Mayan civilization that preceded the Spanish conquest.
Posted by Dave-CostaRicaDailyPhoto.com at 2:55 AM

Another great wave shot! And look at the colour of that water!

That's what I call up close and personal "reporting!" Lovely action shot!

This is a photographic trick that I would not attempt. Good job Dave.

this is another great perspective. you must have gotten drenched

I bet it was a fun experiment.

As I use to say when it comes to photo and cameras, one must always keep trying. And this wave photo is quite well done; I know 'cause being inside water trying to take great shots isn't that easy.
Quite interesting project you have here.